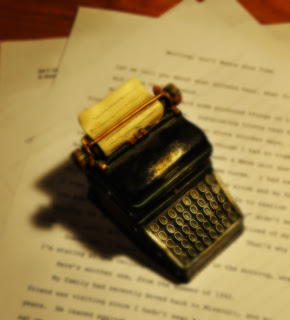 Writers hear much. Some of it follows them throughout life and some makes no difference.
My best friend has said some profound things in the thirty-four years I have known him.  Infuriating truths that bore into your nerves.  During my department store stocker days, I remember whining about my job, even though I had no right.  Back then, my friend divided his time between a MASH unit and the hospital where he worked as an ER trauma nurse.  I had not lived enough yet to understand.  My parents were alive and my house still un-flooded.  I was too untouched by life to realize he and I knew different thresholds of pain.  A “bad day” didn’t mean the same thing to me as it did to him.  When he tired of my whining, he said, “Look, everybody’s job sucks.  That’s why they call it ‘work’ and not ‘play.’”
Guess what I still hear at 2 o’clock in the morning, when I’m staring at the ceiling?
Here’s another one, from the summer of 1992.
My family had recently moved back to Missouri, and my friend was visiting.  He leaned against our washing machine, while I sat on the corner of a desk, beside the typewriter my parents had ordered from Fingerhut.  Because he is a caregiver, he listened to my lamentations again, but what he said at the end became another one of those nerve-jangling truths that this time felt like a betrayal.
That week’s tragedy came out an old copy of Writer’s Digest wherein an article asked, “Do you want to write, or do you want to have written?”
I didn’t like the question, because I had no answer.  Well, that’s not actually true.  I was afraid of trying to answer.  Avoiding it all together meant I would never have to consider that maybe I just wanted to have written.  Most of the articles in WD said those who wanted to have written really just wanted fame and fortune.  I took comfort in that neither of those was my goal, but I never considered it could also mean something else.
Writing takes a lot of work to appear effortless.
Even though I could get lost in writing for hours, some of that time (no, let’s be honest -- a lot of it) was taken up with reading how-to books on characterization or plotting -- painkillers for the blank page.  Those books told me the average professional writer produced about 2000 words every day.  I remember actually circling the number with my index finger and feeling the same giddiness a comic book collector feels every time he steps into an old flea market and dreams of digging up a copy of Action Comics #1.  I wanted to write 2000 words a day.
And sustained a consistent pace only once.  For a whole month.  All during the January before my 19th birthday, I wrote 10 pages per day longhand.  I was so very proud of the notebooks piling up, but I still refused to call myself a writer after that, because after that I never finished much.  Does that sound like you want to write, or that you want to have written?
After my friend quietly listened to these fears of being an amateur, he said the thing that felt like a betrayal:
“You know, until somebody starts paying you to do this, you’re going to have to accept that it’s just a hobby.”
Something in me shriveled.  My pragmatic friend was wrong.  Why did this have to be a hobby?  Why did money have to be the determining factor?  I didn’t have to be rich.  All I wanted was to be able to write full time.

If your goal is eight pages of finished script a day and you only produce two pages on Monday, you had better produce fourteen on Tuesday . . . . You may never gain [financial security]. If you can produce only one or two category novels a year . . . you will never know a time when the wolves are not a stone’s throw from the door.

My friend is a clever man.  I think he wanted to piss me off enough to prove him wrong.
I didn’t listen.  At 21, I still had decades to become a writer.  If I didn’t want to write today, I wouldn’t have to.  It was okay to take a break every time it got difficult and inspiration evaporated.  I wouldn’t have to push myself until I was publishing regularly.  No, I didn’t realize the contradiction.  I refused to let myself just write, even if it was crap.  If I had done that . . . just write and write and write . . .
Only about 30% of what professional writers produce is publishable, meaning that what the public sees is only about 1/3 of what an author actually writes.  It was years before I would understand that the good ideas lie beneath all the crap, and that you have to write through the upper layers to get to them.
Instead, I kept waiting for when I would be able to write 2000 words a day.  Obviously, this inevitably happened to all writers, magically, around the time they sold their first novel, probably.
Then, I turned 30 -- with the knowledge that Stephen King published his first novel at 26.  By the time he was my age, Isaac Asimov published I, Robot and was probably working on the last draft of Foundation.  Bradbury gave us The Martian Chronicles.  A 30-year-old Poe was inventing new genres.  And Conan’s father Robert E. Howard was dead.
I had been writing “seriously” for 12 years.  The notebooks I rolled through and completed that one January now held pages with yellowing edges.  One drawer of the filing cabinet hid a handful of short stories, most with chunks still waiting to be written.  I had even submitted a couple.  Years ago.  However, if someone had asked me “Can you show me some of your writing?”  I would have had a hard time finding something whole.
When was the last time you finished a story?
I don’t remember.
If I had written just 100 words a day in those years, I would have had 4 novels or roughly 100 short stories.
Plenty of time remained though, even if I hadn’t felt like writing in the last month.  (The periods that I didn’t write had grown longer.)  I didn’t have as much time as I used to.  I had been working 40 hours a week for a number of years.  I had a marriage and a mortgage and much better excuses not to write.
Besides, if I didn’t write anything today, at least I didn’t write anything bad.

If you did not write every day, the poisons would accumulate and you would begin to die, or act crazy, or both.

-- Ray Bradbury
Zen in the Art of Writing

I was either 32 or 33 when I quit.  Back in my early twenties, I met a real estate agent who had once wanted to be a writer.  “Don’t ever give up,” he said. “You’ll regret it.”  I thought: That’s not something I have to worry about. Why would I ever give up?  When I did, I realized he was wrong.  The word “hobby” no longer offended me.  Walking away from writing no longer felt like hollowing out my soul.  It merely faded into something I used to do.
Another decade passed.  I became a dad.  I got a degree.  I got hurt.  The house flooded.  Mom was gone.  Then, so was Dad.  And through all that I never had anything to write about.
Remember my best friend who is full of those quips that seem to stick in your skull?  He picked up a new hobby in the last few years.  He writes a blog called The Pen and the Sword about his adventures as a Redneck Diplomat.  He’s working on a book too.  He always did run faster than me.
Oh how I wish I could go back and talk with that 8-year-old child, who lived in the countryside, bored, and decided one day to write a play about a monster.  The 4 or 5 pages contained several sketches in place of the words he could not spell.  I would have said, “Keep doing that.  Every day.”
I am 41 now.  I wonder how old is too old to start your life over?

Where Do You Get All Your Ideas?
What Funny and Frightening Have in Common